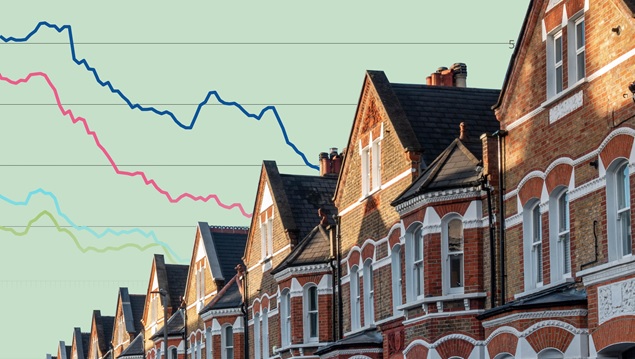 Welcome lads , gets your cup of tea let’s dive into UK housing market analysis and forecast , Is it worth to get in now or wait for Inflation , recession and high mortgage rates clouds to disappear.

When you speak to locals, it becomes clear right away that the property market in England is in transition. In an effort to rein in spiraling inflation, the Bank of England has raised the base interest rate half a dozen times since December of last year, most recently by 0.5 percentage points in early August. Homebuyers are rushing to make decisions in response to growing costs: some are speeding up their plans, while others are abandoning them.

As a result, according to economists, the UK housing market may be reaching a tipping point, breaking an almost ten-year cycle of price increases.

Due to the pandemic and the government’s stamp tax vacation, which caused a frenzy of moves and reduced the supply of larger properties with gardens that might better accommodate homeworking, house price increases have only intensified over the past two years. Potential purchasers frequently complain about being outbid, with some properties selling for significantly more than the asking amount.

You can refer to bank of England mortgage rates here :

With rising mortgage rates home buyers are speeding up and pressing banks to get their loan approval quick , just last month itself loan rates jumped 1.5%.According to many prospective home buyers this is big change and might weigh in heavy on the home buyers.

For the first time since 2013, the average [mortgage] rate for new purchases and refinances has surpassed the rate on outstanding mortgages.

Every time you’ve relocated or refinanced during the previous nine years, the cost has decreased. That circumstance is now changing. That’s significant because traditionally, it occurs at times when the market is substantially sluggish.

Rising Cost of living in UK:

Buyers are increasingly coping with the cost of living problem and the weakening economy in addition to the higher borrowing charges. By April of next year, energy costs for the ordinary British home are predicted to reach £4,420 annually, more than tripling their level at the beginning of this year.

Around 80% of UK mortgage borrowers are on fixed rates, which means they have fixed a monthly payment for a predetermined time period, sometimes two or five years. For the duration of their term, this group will be protected from rate increases, but they may thereafter have to deal with an increase in borrowing costs. 1.3 million fixed-term mortgages are set to expire this year, and another 1.8 million will do so the following year, according to industry group UK Finance.

Mortgage deadlines will compel homeowners to make difficult choices as they approach them.

So the Question you been waiting to be answered :

Prior to the end of the year, the Bank of England warned that inflation could reach 13% and predicted a recession comparable to the one that occurred in the early 1990s, when the interest rate peaked at 14.875 percent and property values in south-east England plunged by 36%.

Such declines appear to be quite unlikely at the moment. Halifax, a mortgage lender, reports that between June and July, average property prices in the UK decreased by 0.1%. Although the decline is small—annual house price inflation is still close to 12%—it is the first decline in a year and might signal a significant change in trend.

However, there is a genuine possibility that prices would decline if the economy worsens.

What does this mean for Buyers ?

The housing market is now more unaffordable than it has ever been as a result of the past nine years of lax monetary policy, tighter banker rules, and high levels of government support.

Over the previous nine years, nominal home prices have increased by 63%; salary growth has not kept up. The Office for National Statistics reports that as a result, the ratio of average housing prices to incomes has increased dramatically from three to five times in the early 2000s to roughly nine times in England and Wales, and as high as 13 times in London.

While that might seem enticing, a significant decline in home prices is typically accompanied by tougher financing standards, so it may not immediately benefit first-time buyers. According to UK Finance, there were 33,403 mortgaged first-time buyer purchases each month in 2006, the year before the previous catastrophe. In 2009, that decreased to 16,163. Up to the end of 2014, no month has exceeded 30,000.

The rental market offers little solace to those who are locked out. Since 2009, owning vs renting has been more affordable on a monthly basis, according to Zoopla. But many have been discouraged from buying because of the Bank of England’s stress test and high deposit requirements.

The rental market makes it difficult to save for a deposit because rents are higher than mortgage repayment rates. This is one reason why Savills anticipates that the Bank of Mum and Dad will finance nearly half of all first-time buyer purchases over the next three years. Additionally, there are indications that some landlords may have lately increased rent quickly, making it even more difficult to save for a deposit.

Do check out our chart section for more property and stock charts.

Please subscribe to our newsletter to get the latest news in your domain of interest. Don't forget to follow us on social networks!

Best Stocks To Buy in 2023 with HIGH GROWTH

How To Use The 2023 Recession To Get Rich